Now that I have a browsable network resource, it was time to start copying some files.

At this point I am excited that things were working.  I immediately started copying files to see what kinds of speeds I'd get.  I was pleased when I was able to upload 93 Mbps!  Then I realized I was only connecting at 10/100.  I broke out my gigabit switch and started the bandwidth tests all over.  This time I was having some serious issues.

I am using a Shuttle SN25P PC with an onboard nVidia NIC.  Since I've owned this thing, I have never been able to get gigabit to work properly.  To make a long story short, I finally got gigabit working properly (see my posting under TIPS).

Whenever I tried transferring over gigabit on the NAS, the transfer would immediately halt and the NIC went down.  The only way to get back online was to set the IP address locally through the console setup screen.

I rememebered reading about FreeNAS not having driver support for the Marvel NIC provided in the H340, but that was on older version of FreeNAS.  My version had the driver provided.  I started to think it was related to Samba and read many forums about configuring Samba for FreeNAS and in general.  I tried various configurations but did not come to a resolution.  I then tested my connection with the FTP service - same problem.  Thinking it was some sort of Windows to Unix issue, I fired up Ubuntu and had the same problem with both Samba and FTP.  On 10/100 the connection was fine, at 93 Mbps I was not complaining.  But I wanted gigabit speeds!

After getting frustrated with the situation, I broke down and bought a PCI-Express network card.  I picked up the Intel EXPI9301CTBLK gigabit card for $34 from newegg.  It had phenomenal reviews so I jumped on it.  I could not find any documentation anywhere about driver support with FreeNAS so I took a chance.

When I received the card, I connected it, booted up, configured the interface, and immediately began bandwidth testing.  The connection was not dropping off, but the speeds left a lot to be desired.  I was receiving about 40-45 Mbps.  What a joke!  I tinkered with the Samba configuration changing the buffers and AIO but could not find a perfect combination.  Then I thought about the connection issues I had with my nVidia NIC in my desktop.  When I was having issues, I had changed it to 100 Full Duplex instead of auto negotiate.  I was only connecting at 100Mbps!  I changed the setting and tested again.  This time, I was getting 100-200 Mbps.  Big improvement, but not a consistent speed and not as fast as I would have liked.  I changed some of the Samba settings and ultimately ended up using the defaults.  I had read a lot of posts about configuring Samba, how you have to tweak your buffers and AIO and disable Send File in order to get decent speeds.  With the default settings, I was able to upload a file from my desktop my H340 at 340Mbps on average!  At these speeds, I am totally pleased.﻿

Once I had FreeNAS running and had a stable network connection, I wanted to perform some speed tests to see what kinds of speed I had.

Have you heard of TeraCopy?  It is a really cool app that replaces the incorporated copy functionality in Windows.  I used the command line feature of TeraCopy to transfer the files from my server to PC and vice versa while monitoring the FreeNAS graph on the web interface and Netstat Live by AnalogX on my machine to get real-time results.  Since I was using command lines to perform the copies, I threw it all into a batch file and included echoes for times before and after the copy to get the times of the copy.

I only used Netstat Live and the FreeNAS graph to obtain speed results because I am not aware of an app that will copy a file (or files) for you and give you statistics on the transfer.  If you know of something, please let me know!  Otherwise, I'll probably have to write something myself.

Average speeds per file based upon Netstat Live 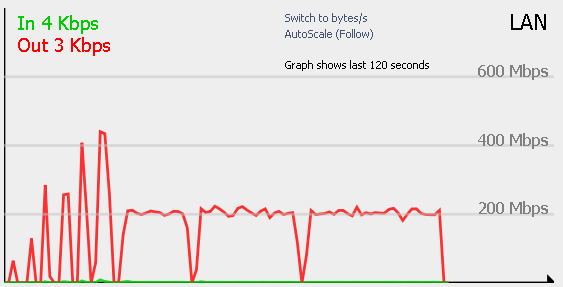 Average speeds per file based upon Netstat Live 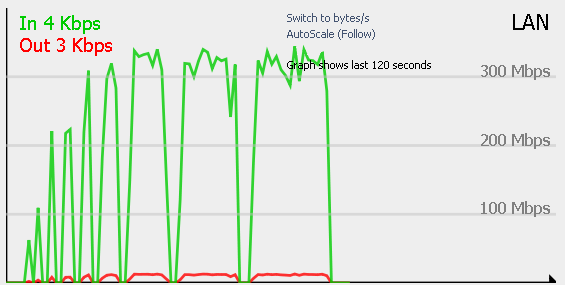 Here is a graph of that shows the time it took (in seconds) to upload (write) and download (read) the files between the H340 and my PC. 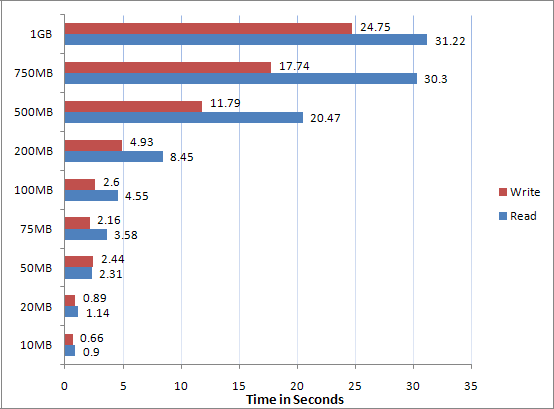 The results were great.  I believe the bottleneck in my testing is the old hard drives I used.  I will be using newer/faster drives when this is fully implemented, so I will have to perform additional tests once it is complete.

The Acer H340 was not my first choice when it came to a network storage solution.  In fact, it wasn't even on my list when I realized it did not have a video output and I would be forced to use the provided Windows Home Server.  But curiosity got the best of me and I was fortunate to find other enthusiasts who helped make sway my decision.

I think Acer has a great product for SOHO network storage solutions.  If you are not a savvy IT guy, the H340 still has the built-in Windows Home Server.  I am not a fan but I have a friend who is a die hard user and is always explaining the benefits and trying to convert me.  Now that Microsoft is removing the Drive Extender functionality from WHS, I will be sticking to FreeNAS or other FOSS.

For the price, the H340 is the cheapest out-of-the-box solution for network storage, and adding the cost of FreeNAS makes it that much more appealing.

Overall, I am pleased with FreeNAS and especially pleased that I was able to get it running on my H340.  My next big project may have to be on some kind of backup solution for my H340!  I could purchase another one and use rsync or backula (on FreeNAS) to backup my data, but where's the fun in that!